FAQ : Behind The Scenes to a Styled Shoot - Jasmine Star

Learn how to turn followers into customers with my top 3 Instagram resources that teach you how to stand out from your competitors and turn your Instagram account into a money-making machine! 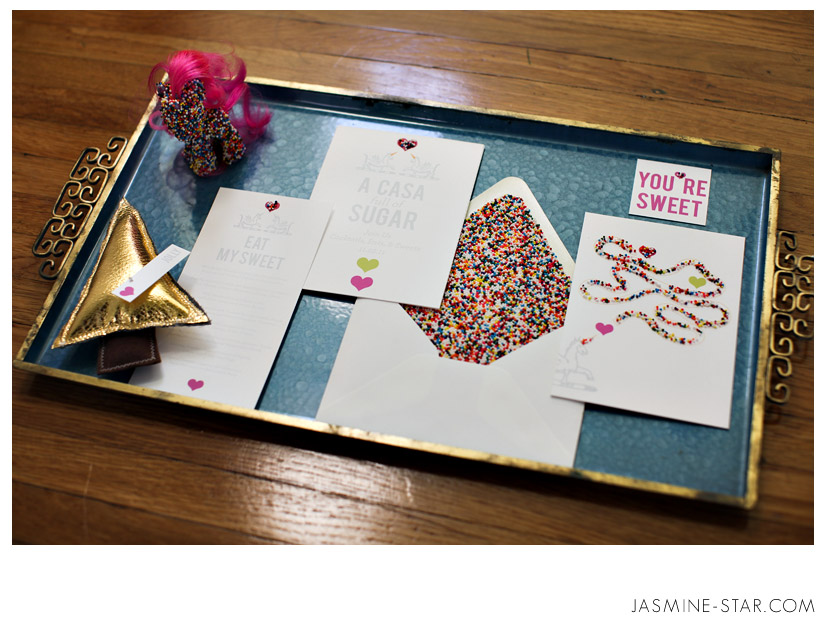 FAQ : Behind The Scenes to a Styled Shoot

A few weeks ago, I had the distinct pleasure of shooting an editorial for Rue Magazine. It was one of my most favorite shoots to date and I'm honored to have worked with such a great team. I mentioned before how a styled shoot usually works in this installment of Shooting Star, but I thought I'd take a bit and chat about the questions I'm usually asked about surrounding how these shoots happen and what goes into them.

How do styled shoots actually happen?
They happen in a myriad of ways, but–usually–a designer/coordinator will assemble a team of vendors to produce a shoot that will, hopefully, serve as inspiration and a vehicle to move his vision forward. The coordinator will hand-pick his team based on the style of the shoot and find a way to play to everyone's strengths.
However, I will say that when I first started photographing styled shoots (here's a look at one of my first), I reached out to a team of vendors on my own. Back in 2009, these types of shoots weren't as popular as they are today and those that were happening didn't include me. There was a distinct crew of high-end creatives who put together shoots (they had the money and resources), but a new wave of creatives entered the field and put together shoots in a way that was less costly by leveraging personal connections…and elbow grease. For instance, the first styled shoot I photographed occurred at a park in my neighborhood, instead of renting a venue. Some of the details in the shoot were personal items of the designer instead of renting/buying what she needed. Thinking outside the box is a great way to get started and showcase your artistic voice.

Who's in charge?
Traditionally the designer/coordinator is in charge. Afterall, it's her vision we're all collaborating to achieve. In this shoot for Rue, the creative director–Anne Sage–was on hand to articulate what she needed and the outline of the editorial.
I always start each shoot by talking with the visionary to ensure we're on the same page. For instance, I asked Anne to tell me more about the holiday party. Who's it for? What do they do for a living? Where do they hang out on the weekends? How many friends are attending? What type of work do their friends do? All of the answers provided a framework in which I could work and cast a vision for the type of photos I needed. I also mentioned this idea of creating a story in this post if you'd like more ideas. For this shoot, I needed two types: 1. editorial images (photos that appealed to a photo editor); and 2. showcase photos (photos that appealed to contributors).
Because of short time frame in which I needed to work (I had 1.5 hours to shoot five set-ups), I asked JD to join me so he could focus on one thing: shooting editorially. These are candid pictures of guests in action and completely uninhibited. This is his strength as a photographer and freed me to photograph key details that would work both for the feature as well as the creative team involved.

Do you get paid?
Generally speaking, no. Everyone contributes to a shoot (their time, labor, and talent) for the art of collaboration, being creative, and trend setting (the strong photo shoots, anyway). The way it works for my participation is to provide an online gallery where the creative team can download images after the shoot. They can use the images any way they want as long as they attribute photo credit.
I suppose the creative team is paid in creative currency. There's something magical about seeing an idea come to life and furthering your artistic voice with industry peers.

What lenses do you use most during a styled wedding shoot?
I've gone into detail about the lenses I use on this post, but I usually shoot with the Canon 50mm, 1.2 most of the time. It yields great perspective for editorial photos of details and versatility in small spaces. I used the Canon 100 Macro, 2.8 IS for photos of the paper goods on the table because the light gray text was difficult to capture otherwise. I'll occasionally use the Canon 85mm, 1.2 but only if I'm working outdoors or have a bit of space to work in.

What are common mistakes during a styled wedding shoot?
This is difficult to answer, but a general misstep is lack of vision. It's no longer enough to set up a pretty table in a field and call it a day. It's been done far too many times and lacks originality. The strongest shoots are those with a theme and the creative team works in tandem to remain closely tied to the theme. For instance, vintage isn't a theme…the idea of two lovers meeting at the circus in the 1930's and planning a party around how their day unfolded is a stronger idea. Using this outline, every design decision is measured against it. Was pink a color used in circuses during the 1930s? No, so all pastel colors within this hue should be omitted from the design aesthetic. Did brides wear white strapless satin dresses during this timeframe? No, so perhaps style the bride in an ivory lace dress to properly execute the vision. Was ice cream served at circuses in the 1930s? If not, consider refraining from using this idea and instead use, say, a multi-flavored popcorn station. Okay, so maybe that's not the best idea, but you get my point!

What's a piece of advice you'd share before I shoot my first styled wedding shoot?
Be unique. With the abundance of styled wedding shoots, it's harder to stick out and create resonance on the web. The best thing a creative team can do is think of a unique theme (preferably one that hasn't been done already) and create a plan for the shoot itself. If the shoot is for creativity's sake, then state it in the beginning. If the goal is to get it featured on a wedding blog, state it (but take into consideration which blog you want to submit to and ensure the shoot aesthetic appeals to the intended blogger…for this shoot, we were lucky to have it also featured on Green Wedding Shoes). If the goal is to hone your skills in executing a theme via artistic collaboration, simply ensure everyone is on the same page.

I hope this helps and sheds light into how styled shoots work…of course, this isn't the only way they're done, but I thought I'd offer my perspective the best way I can.

Good Reads : Is Everyone Hanging Out Without Me? »

How To Get Organized And Create
A Productive Work Schedule

5 Photos For You To Use On
Social Media

Get Started By Downloading My Free Resources

I wouldn’t say we were business nerds but my husband just sent me a Slack message asking me to call him.

If you need me, just follow the trail of empty La Croix cans around my house.